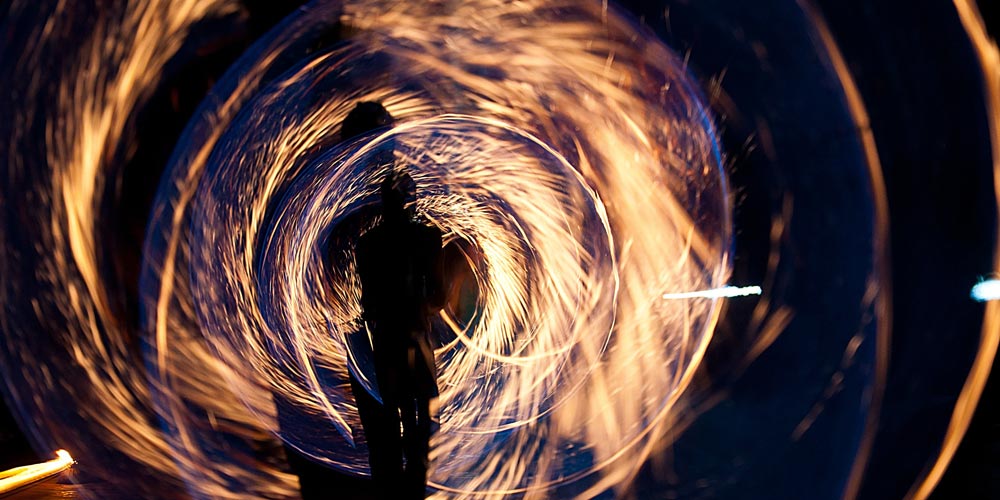 For the Celts, Samhain (pronounced SOW-in) was a time of deep spirituality when the veil between worlds thinned so that residents of this world and the next were in close communion. Samhain was also the beginning of the Celtic new year, when winter was coming—a time to gather around the home fires to celebrate kinship and commemorate the dead.

The local seanchaí would be on hand for the telling of epic tales and the singing of songs. And both children and adults would wear masks while they visited each other’s homes hoping for treats and only a few tricks by the faeries and other spirit beings who frolicked about.

This poem astonished me when it emerged. What do you think it’s about? (Listen here)

Paso Doble – Spirals in the Dark

It’s safe in here, she says to herself.
The door is locked, the windows barred,
no way for the creature
to gain entrance
to my sanctuary.

Lotus-posed, she seals her peace
with chant and charm—
impervious at last.
Ears stopped, shields up,
lest the howling without
jar her careful quiet.

But what knock has howl become?
What pounding now
that her studied protection
will not drown?

Be still! she shouts.
You are not welcome in my den.
Have you no respect for sorrow?
A minute’s peace is all I ask.
Why won’t you go away?

A breath, a beat, a space, a pause—
And then a curdling cry
that shakes her house
to its foundation.

Too much, too much, she bleats.
You’ve pushed me far enough!

Slowly she closes the door.
Latches, locks, and shutters the portal
in satisfied relief.

Then turns with sudden shock
into the face of two fierce eyes
glowing gold
above the snarling snout
that threatens to devour her.

Circling ’round each other now,
never breaking eye contact,
they move first left, then right
in ever-tightening spirals.

Closer and closer
until he rises up
and snatches her to his breast—
not into his glistening maw,
but to his heart in wild embrace.

And to her great astonishment—
they dance.

Welcome to my blog. I look forward to connecting with you, sharing insights, and growing together along the path of self-transcendence. Please leave comments and ask questions. We all learn more in conversation.