↓
My Story
I would like to share with you how I became an award-winning writer, ecstatic poet and storyteller-mystic.
Here is a little glimpse of my life journey.
Early Days
I was born and raised in Denver, Colorado, at a time when the biggest local event was the National Western Stock Show.

My heroes were Roy Rogers and Dale Evans, who were cowboy actors and singers. I wanted to follow in their footsteps — which I guess I actually did. Because at the age of five I proudly announced that I was going to be a singer and an actress.

For the next 25 years I vigorously pursued a career in entertainment, earning a BA in theatre, studying acting in England, and voice in Boston and Hollywood. Gigs weren’t always plentiful, but they were certainly a lot of fun — especially doing comedy.

I never quite mastered horseback riding, but I do live in Montana where there are lots of horses — and cowboys. 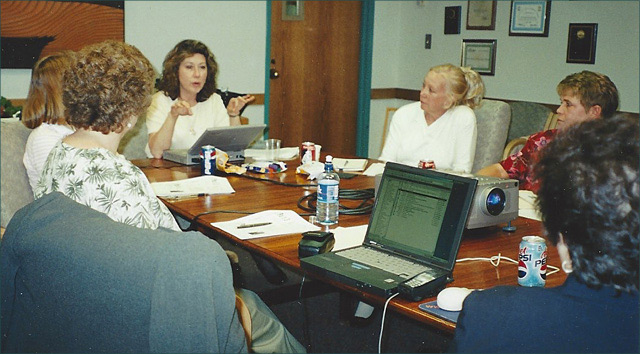 Eventually it became clear that I needed a “real job.” So, like many would-be actors, I made the transition from the boards to boardrooms as an executive assistant to leaders in a variety of industries.

But I was born to communicate. By 2002 I had graduated from executive support and was conducting a leadership training academy for a statewide community college system. I was also in the process of developing my own training business—which I launched on September 11, 2001. Good idea. Unfortunate timing.

So when the opportunity came along to join a large East Coast professional development company as an instructor/facilitator, I jumped!

Becoming a Writer
While my training career was taking off, I was also nurturing a secret dream to become a published author. As chance and life’s vagaries would have it, that opportunity arose in 2008 when my husband Stephen died from colon cancer.

Not long after we learned in 2006 that his illness was terminal, I had a vision that my mission was to survive him and tell our story.

So for the four years of Stephen’s illness, I wrote down every event, experience, feeling, trial, and inspiration. When he passed away, I had our complete story, recorded in my journals — ready to be compiled and offered to the world.

Writing that story became a lifeline and my reason for being.

The result was my 2010 award-winning memoir A Beautiful Death: Facing the Future with Peace, revised in 2015 with the subtitle Keeping the Promise of Love — which is really what we did. 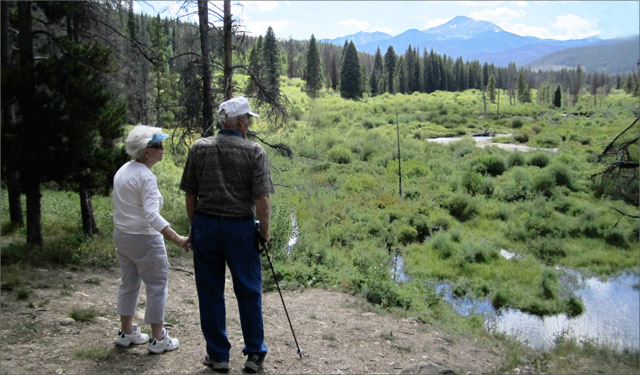 The Denver Hospice had been actively involved in supporting us through Stephen’s passing. And now they became my ally in moving forward in life.

In 2011 I returned to work as a trainer for an arm of The Denver Hospice, now writing and presenting public education events on hospice, palliative care, and other end-of-life topics.

It was a profoundly rewarding time of my life — being able to inform those facing life’s most difficult journey about how to alleviate suffering for those who must go on and those who must survive them.

Also in 2011 the great people at Psychology Today offered me a blog that we titled “A Beautiful Grief.” These weekly articles came directly from my personal journey with loss. And they were also profoundly informed by the inspiring conversations that occurred during my hospice workshops.

In 2012 my team and I published a collection of those articles as A Beautiful Grief: Reflections on Letting Go. This little book won several awards and continues to receive loving support from people in the hospice community.

Returning to the Magic of Ireland
https://youtu.be/lEYukKWRmRI
I had first visited the home of my Lafferty ancestors in 2009, where I reconnected with Stephen’s spirit during a remarkable encounter with a Celtic holy woman in Kildare.

In 2012, I was once again inspired to travel to the Emerald Isle for a pilgrim’s journey that reconnected me with my Celtic roots and awakened a deep sense of my own Soul Poetics.

I subsequently returned for three tours in 2018 and one more in 2019, which solidified my feeling that Ireland is the spiritually thin place my soul homes to. The result of these rich experiences is a book of poetry and photos called Sparks of Celtic Mystery: soul poems from Éire which is a lovely keepsake for anyone who loves Ireland as much as I do.

Making LIGHT of Change
Throughout the years of coming to grips with Stephen’s passing, I became increasingly fascinated by the process of change. How does it work? Why is it so hard? What do successful change-makers do differently than others?

Following my own experience in dealing with dramatic loss, I developed The LIGHT Process — a series of five powerful questions that anybody can use to move through life’s myriad transitions.

And along with the five LIGHT Questions came the concept of the Wise Inner Counselor™ — my term for the powerful voice of intuition, imagination, and insight that has guided my path since childhood.

After testing the process in radio interviews, workshops, and retreats, I released the book in 2013. And then I ran out of things to say. 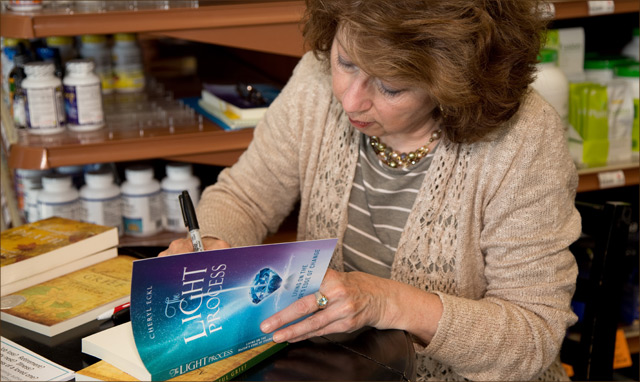 Have you ever reached a plateau in your life where everything goes suddenly blank?

That’s what happened to me in 2014. I had literally written to the bottom of my experience. So I decided to expand my horizons.

For the next 14 months I traveled to New York, Washington DC, Atlanta, Charleston, Costa Rica, Canada — and my favorite place in the USA: Teton National Park. Here, in the spiritual center of my universe, I rediscovered my soul’s inspiration — and almost immediately, I began to write again.

Finding Renewed Inspiration in Poetry
In early 2015 a friend reminded me that April was “Write a Poem a Day” month. Writing poetry had always been my most deeply meditative practice, so I took up the challenge with enthusiasm. April’s poems flowed into May, then June — and finally into July, when I realized there were enough poems for a book.

Eventually, one book of poetry turned into three books, and I adopted the nom de plume Cheryl Lafferty Eckl. The poetry books came pouring out, one right after another, in an exhilarating experience of collaboration between the seen and Unseen. In order, these collections are: 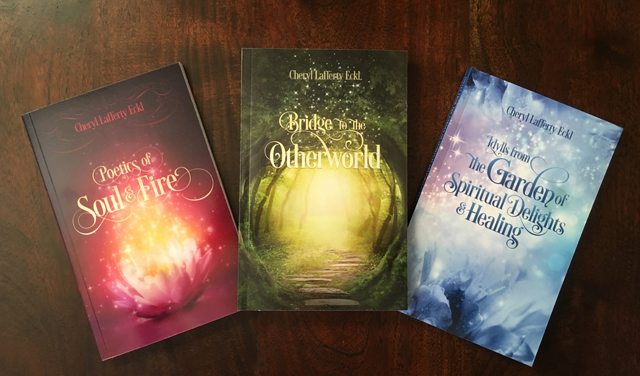 Coming Full Circle
Following my passion for words as a mystical poetess and author of prose has infused my life with new vitality, deeper commitment to my spiritual path, and more profound understanding of the human heart.

As the land of Éire has always been in my heart, so has the richness of storytelling. In fact, I’ve begun calling myself a seanchaí, which is the Irish word for storyteller.

I will always be a lover of poetry, as even my prose books demonstrate. Yet these days, writing spiritual romance novels with an Irish theme is the passion that calls me—so much so that my first novel, The Weaving: A Novel of Twin Flames through Time, has sparked three sequels known as the Twin Flames of Éire Trilogy.

These books are The Ancients and The Call, The Water and The Flame, and The Mystics and The Mystery. (Check out the virtual book tour.)

Of course, I will always be a teacher. My mission statement remains: To learn, to love, and to teach so that others may have a better life.

But the form that teaching will take is emerging now as life and technology provide new opportunities for us to connect virtually as together we explore what it means to live a life aflame with Soul Fire.