In the “now” of the nunc fluens

The idea of the fluid present comes from a concept held by early Christian mystics. They called it the nunc fluens or “flowing now.” In this state of “present-ness,” the past is preserved while thoughts of the future can also be entertained.

Whether we are thinking about the past, a current experience, or the future, that thought is in the present. As thought and experience flow, so does the present moment—the nunc fluens.¹

Listening to the body is a useful practice for experiencing the fluid present—and for consciously working with the Wise Inner Counselor, moment by unfolding moment. The following excerpt from The LIGHT Process illustrates what I mean.

In the flow with Tango the horse 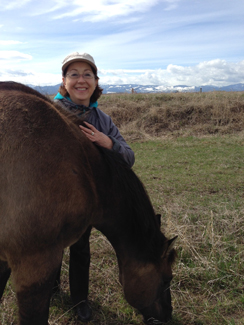 They call him Tango—an apt name, as he seems to dance between the fragmented world of humans and the integrated one of his own equine species. Sometimes he shows a bit of attitude, yet he is an affectionate creature who elicits deep emotional response from his riders….

I didn’t fully appreciate Tango’s special gift until I interacted with him. Watching others ride him didn’t do it. I had to touch him, enter into his enormous energetic force-field, and engage in the relationship of grooming and riding him.

“He’s checking you out for treats,” commented one of the other riders on the first day I was to work with Tango. He was snuffling around at my hands and hair and jeans pockets, allowing me to scratch him under his chin.

I don’t carry treats when I ride, so I doubt this was Tango’s intention. My sense is that he was letting me know he was both physically and emotionally available.

“He loves to be groomed,” called out his owner across the corral from where she was bridling another horse for the upcoming trail ride.

And I could feel it. The longer I handled Tango’s body, brushing and combing his coat, scratching the itchy spots he can’t reach, the deeper became our connection.

Once I was in the saddle and out on the trail, I felt his movements schooling mine, teaching me to loosen my hips and sway upon his back as we rode across a lush, open field. The feeling was invigorating.

Things happen out on the trail as a horse navigates obstacles and adjusts to irregularities in the landscape, so I had to remain alert in order to shift with my mount….I had to pay close attention to my body and to his, without tensing up or mentally trying to do everything right. I couldn’t space out or become distracted by the playful Black Angus calves that romped up to the fence to check us out.

Nor could I give in to Tango’s tricks. Even at twenty-plus years old, he is a lively boy. And like most trail horses, he is eager to return to the safety of his corral after a ride.

“Don’t let him take off on his own,” warned my instructor. “You can ask him to trot, but he doesn’t get to initiate it.”

After an hour on Tango’s back, I was feeling comfortable. So I asked him to walk, then to trot, then to slow again to a nice, easy walk. And then it happened. Almost without realizing it, I felt him think about trotting. I sensed the tiniest beginning of him gathering his energy to pick up the pace—and I perceived it before he could do it. Suddenly I understood what it meant to intuitively know something in the fluid present.

“Whoa, Tango,” I said firmly, while gently pulling back on the reins. “I didn’t ask for a trot, so you don’t get to hurry.”

We soon returned to the horse camp, where I unsaddled Tango, brushed him down, and gave him one last hug for the day. Leading him back to his corral, I realized:

This experience in the fluid present is how the Wise Inner Counselor cues us about where and how to be—and about who or what to avoid. The near future is contained in this moment that has emerged from the recent past. In the fluid present, they are all one.²

¹ Philosopher Ken Wilber discusses the nunc fluens in Sex, Karma, Creativity (Boston: Shambhala Publications, 2014) and in a 2013 interview at the Integral Conference, “What Next…The Future of Consciousness, Culture, and Technology” (www.whatnextintegral.com)
² The LIGHT Process: Living on the Razor’s Edge of Change, p. 102-105.