My family believed in an afterlife, but I thought my parents were profoundly un-curious about what actually happened “over there.” I, however, found it fascinating to imagine a world beyond the physical where people went when they died and where one day I might go too.

I was especially intrigued by my Grandma Cody’s near-death experience that had left her with a gift we called her “hotline to God.” While lying gravely ill with childbed fever after the birth of her fourth child, she heard what she described as angels singing outside her window and she felt a divine presence that stayed with her throughout her life.

One summer, when I was about nine years old, we were at Cody’s house for lunch and she was saying grace in her quaint way: “Now, Jesus, you take care of these dear children.” (She always talked as if he were her best friend.) With my head bowed and my eyes closed, I suddenly felt the room fill up with a radiant energy. Peeking around, I couldn’t see anything, but I could feel it. And I silently announced to myself, I want what Grandma Cody has. She clearly had friends in heaven and I wanted them too.

Seeing through the veil between worlds 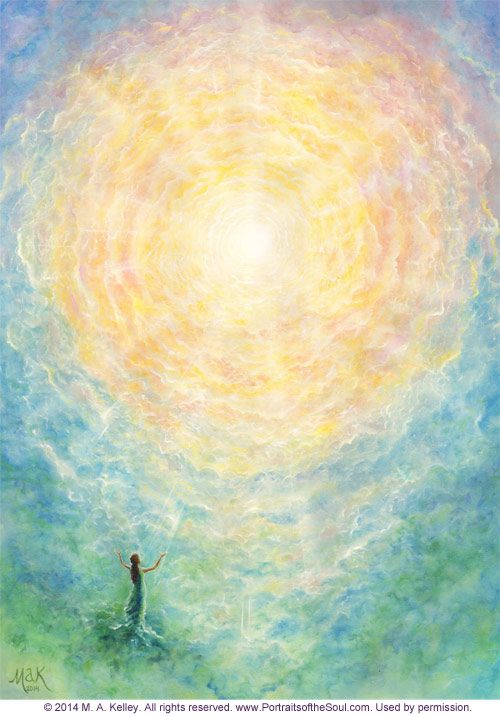 Later that summer, I got my first real glimpse of the Other Side. I was lazing on my swing set in our backyard, enjoying a balmy breeze, thinking about the book on ancient Greece I had been reading.

I was imagining the hot Aegean sun beating on my face, making diamonds of light on the azure-blue sea, with iridescent marble columns a short distance behind me. It was a scene so vivid I could almost remember being there—but not quite.

As I sat motionless on the swing trying to will myself back to antiquity, I was transported. In my mind’s eye I no longer saw the brilliant white of Greek temples, but rather a tunnel of light—and I had the clear idea that this was where both Jesus and Buddha came from.

Even though I had been raised with traditionally Christian beliefs, this concept did not seem strange, because I had become familiar with the Buddha in my world history books and my beliefs about Jesus were already expanding beyond Sunday-school stories.

Neither of them actually appeared in the tunnel I saw; but I instantly knew the light was where they came from and where they lived. And I felt myself being comforted with a promise that, if I would follow that radiance, one day I would remember ancient Greece—and much, much more.

As I grew up, I didn’t see any more tunnels of light, but I decided I was a mystic—a person who desires union with the Divine, however she defines it. In my late teens and early twenties, I had many experiences of synchronicity—unexplainable coincidences or serendipitous events that I ascribed to being in tune with angels or other spiritual beings. And I did my best to follow the light I had seen in the tunnel….

Yet all the while, I felt a persistent inner hunger—an intense longing for the spiritual connectedness…that seemed so natural to my grandmother.¹

¹ Excerpted from A Beautiful Death: Keeping the Promise of Love, pp. 4-5.